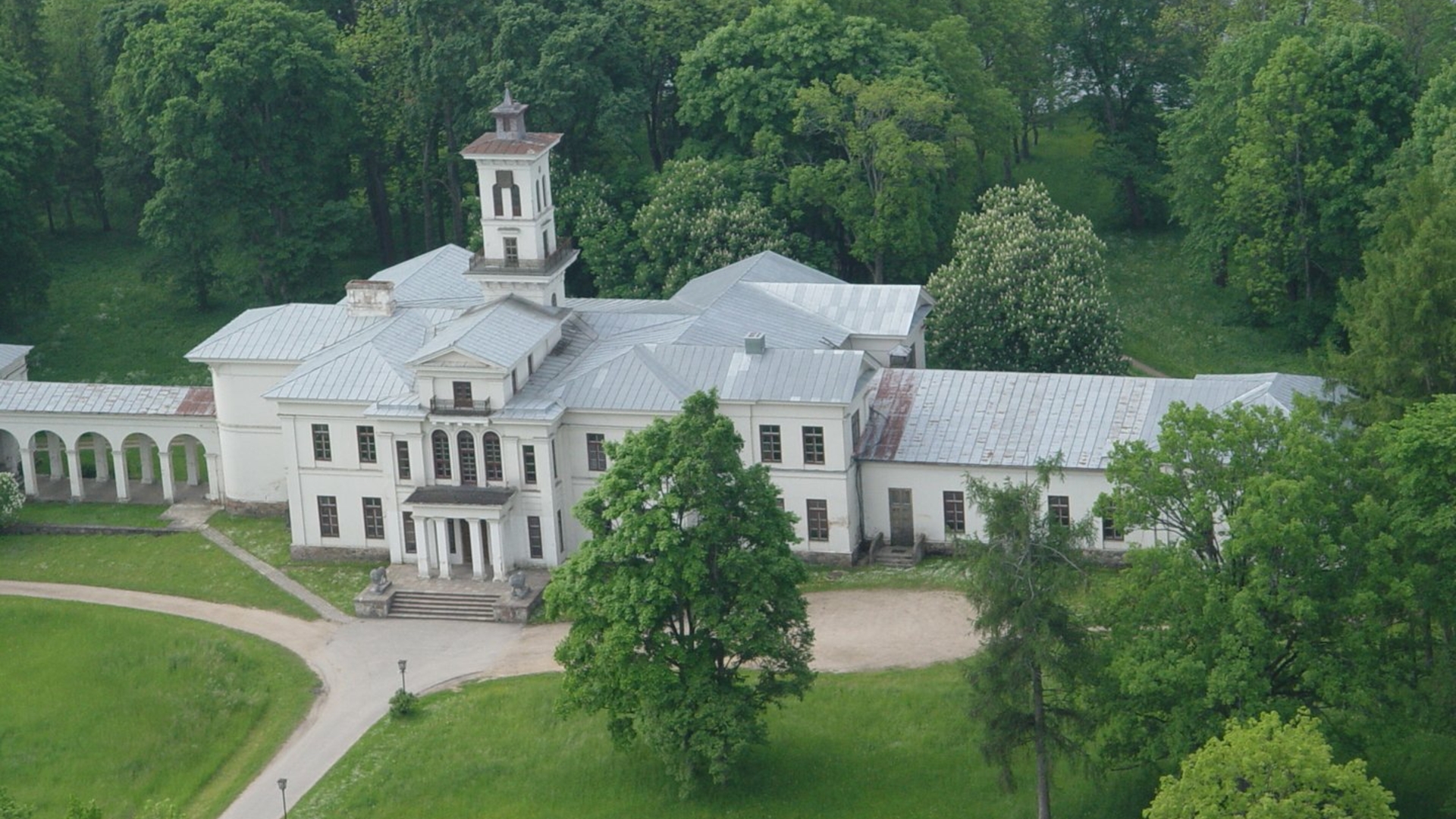 After Lithuania was annexed by the Russian Empire, Biržai town was overtaken from the noble Radziwiłł family, that has become poor at the time, by the nobleman Tyszkiewicz. In the middle of the 19th century the new owners have built a glamorous two-storey palace of irregular plan with a low mezzanine, high belvedere, two one-storey wing buildings. The palace was built on the shore of the Lake Širvėna. It was built in the Classicistic and Empire styles. Besides the palace, the manor complex also consisted of stables, a hut of dog handler, mill, outbuildings, arch-shaped dam-bridge:

• the brick palace of the Empire style, that is reminiscent of Italian villa, was built in 1842 and was rebuilt in 1862. It was designed by an architect Tomasz Tyszecki. The classicistic interior decor of the palace, an impressive representative lounge and two halls were especially valuable. There is a two-storey lobby with 8 pillars and wooden carved decoration inside the palace. Sculptures of lions, that were moulded in the middle of the 19th century in Saint Petersburg, adorned the entryway of the palace. Today decorative sculptures of lions that are made of concrete are standing at the entrance to the palace. The authentic sculptures can be seen near Kaunas Vytautas the Great War Museum, where they stand since 1937 or 1938.

• an arch-shaped bridge-dam over the river Apaščia, that is reminiscent of Roman aqueduct, was built in 1860.

The palace was surrounded by a cozy park with ponds. In 1862 a mixed plan park was set up at the central palace of the park. European spruces, pines, oaks grow in Astravas park, narrow-leaved elms grow by the canal, and a double-stem small-leaved lime with a height of 22 m and with a diameters of the stems of 1 m grows in front of the palace. The European linden, the field elm, silver poplar, European white elm, the common alder also grow in the park. The introduced species include four eastern white pines with a height of 25 m, 8 European larch trees, a tree of cutleaf European white birch, southern wormwood. A lot of bushes grow in the park, including sweet mock-orange, ashy spirea, bushy and narrow-leaved Siberian peashrub, the false spiraea, the wolf-willow. 32 arborescent species are registered. 9 species of bat were discovered in the park. Even 6 of them are listed in the Red Data Book of Lithuania. The Lake Širvėna washes the shores of the south side of the park. There is a dugout canal on the north side, and a mere on the southwest side of the park. The irregularly shaped ponds are very attractive – they look rather natural not artificial.

The Lake Širvėna is the first artificial lake in Lithuania that was formed in 1575 to protect Biržai Castle and the urban access area. The average depth of the Lake Širvėna is only 2,2 m. Its coastline with the length of about 12 km is very winding. The lake forms a part of Širvėna Landscape Reserve. The lake was formed of the confluence of Apaščia and Agluona rivers that was dammed. The river Agluona finishes its course in the Lake Širvėna, while the river Apaščia, after passing the dam, continues to flow further. The approximate area of the lake is 325 ha. The reeds of the Lake Širvėna is the home of 82 species of various birds. Two species – the Eurasian bittern and the Montagu's harrier are listed in the Red Data Book of Lithuania. The lake is also the home of rare, endangered species of amphibians. A wooden footbridge (with a length of 525 m) that leads to Astravas is the perfect spot to admire the stunning landscape of the Lake Širvėna.

Astravo g. 17, Biržai, Lietuva
We recommend watching this site through other browsers, for example. Microsoft Edge
I understood