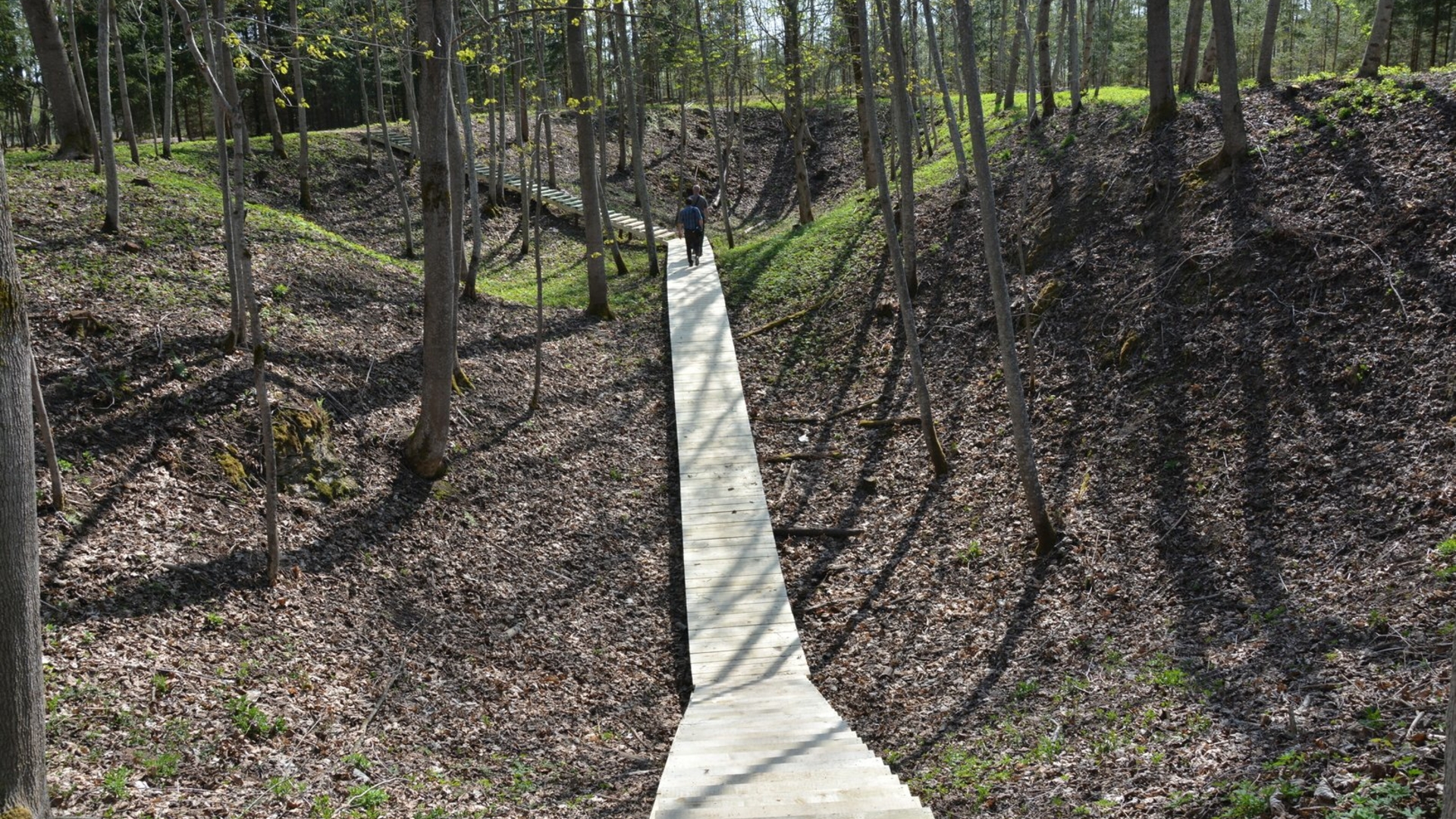 In spring of 2011, in the sinkhole area of Karajimiškis Landscape Reserve of Biržai Regional Park, where karst phenomena actively form the land surface, in Mantagailiškis “Gojelis” (Grove) forest, at the foot of the wall of the north slope of a karst old sinkhole, between rock blocks, speleologists found a burrow leading to a cave. Shortly after the sinkhole, in which this cave was detected and in which the signs that testify to the presence of a badger in this place, was named Barsuko ola (Badger cave).

In autumn of 2012, a cognitive-geological path with a compacted soil pavement was built in the territory with an area of approximately 2,5 ha. The total length of the path is about 700 m. A sinkhole Geologų duobė (Hole of geologists) marks the beginning of the path. The path further leads through a sinkhole Lapės ola (literally Fox cave), and after reaching the southwest outskirts of Gojelis forest the path “brings in” the visitors to a sinkhole area that is situated here, where a sinkhole Barsuko ola and other even larger and deeper sinkholes are located. The path continues to run to the north and leads along the sinkholes that are situated on the outskirts of the forest, then goes downhill through a karst remnant, arches one of the largest sinkholes and on the way back descends to another sinkhole, from which, after ascending between the smaller ones, the visitors once again return to the outskirts of Gojelis. The visitors can overlook even 13 sinkholes from the path. Three of the sinkholes are more complex in shape. Two or three sinkholes that have opened earlier connect with each other in the pit of the preceding sinkholes.

Geologų duobė (Hole of geologists) has opened on 22 April 2003, a few days before Lithuanian Geologists day. This sinkhole is situated in Karajimiškis village, just a kilometer away a sinkhole Karvės ola (Cow‘s Cave).

The diameter of Lapės ola (Fox cave) at the top - an almost perfectly shaped circle (16x17 m). The sinkhole is about 7,4 m deep. This sinkhole stands out from the other ones by the blocks of dolomite with gypsum interlayers which are lying chaotically in the sinkhole. Lapės ola is always dry. It does not get waterlogged in spring when the snow, that has accumulated in the sinkhole, melts. There are openings on the bottom of this sinkhole that are still not clogged. These openings are related to the cavities that have occurred during the karst processes in rocks and that have gone underground.

Mantagailiškio k., Biržų r., Lietuva
We recommend watching this site through other browsers, for example. Microsoft Edge
I understood