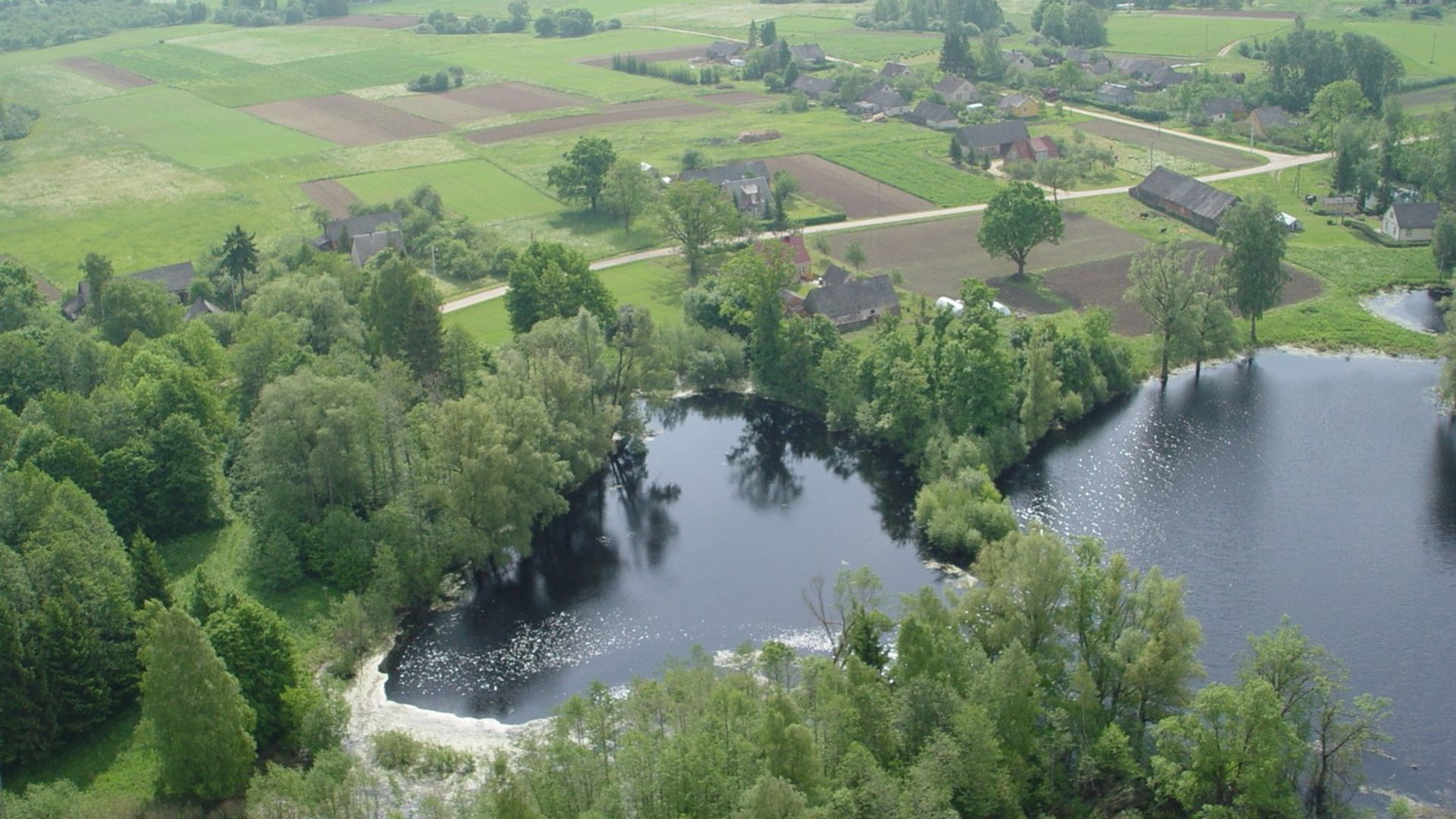 The karst lakelets are the youngest lakelets of this type in Europe. The lakelets have formed during the karst processes. Most of them are located in Kirkilai and Drąseikiai villages and their surroundings. The area of these water bodies is from 30 to 100 m3. The average depth of the lakelets is from 0,8 to 4,5 m. The karst lakelets not always sit in one sinkhole. They often integrate several sinkholes or even their groups. One sinkhole can repeatedly collapse even several times, and the collapse of the partitions of the adjacent sinkholes leads to the formation of karst lakes with an intricate contour.

The Lake Kirkilai (Ilgasis or Upėgalis), that is the most outstanding of all lakes in the entire karst lakeland area, is situated on the north-west outskirts of Kirkilai village. The lake has formed of at least 30 water-filled and united sinkholes of different ages and sizes (there are also plenty of individual waterlogged, boggy and dry sinkholes in the access area of the lake). This territory with an approximate area of 3,9 to 6,0 ha is considered to be a laky labyrinth with a very winding coastline with horns. The length of the coastline is more than 2,5 km.

Various biological processes take place in the karst lakelets. Different sulphur bacteria colonies that are visible to the naked eye are only found in these lakelets. Various species of aquatic plants, including chara, Ceratophyllum demersum, commonly known as hornwort, lemna, bulrush, also grow in the lakelets. The coastal area of the older karst lakelets is overgrown with trees. During the summer, when the water level drops, communities of bentgrass form on their edges.

During the spring melt and after a pouring rain the water level rises significantly and the water covers the peninsula. This causes more islands to form. The maximum length of this lake with a very complicated shape is about 600 m, the width – 300 m, its maximum depth is 6-7 m. The land reclamation ditch that was dug in 1926 from the southernmost branch of the Lake Kirkilai (that influenced the formation of new sinkholes along the route of this canal) connects the lake with Užubaliai peat-bog that is situated on the southwest side three kilometers away from the lake. The reclaimed stream Šilinėlis outflows the Lake Kirkilai at its north end. At the distance of 1 kilometer the stream flows through the lakelet Jonava (Šilinis) with an area of 3,5 ha and then at the distance of 1,2 km it reaches the river Apaščia. The surplus of water outflows the Lake Kirkilai through the stream Šilinėlis, and when the water level in the river Apaščia is higher, the flood water rushes upstream by the stream Šilinėlis and through the same Lake Jonava (Šilinis) reaches the Lake Kirkilai, raises its water level that usually upholds at absolute altitude of 46.7 m (the water level fluctuation amplitude is 2,4 m).

The Lake Kirkilai and its surrounding area with the rural homesteads are considered by every visitor to be attractive and memorable. The lake is especially beautiful in winter when it is covered with snowbanks and keeps blowing a steam through its unfrozen quags, that rises above the rimy leafless scrubs like in synchrony with the smoke that rises to the sky through the chimneys of the homesteads. In spring, when the meadows surrounding the lake get covered with a fresh bright green colour, the coastal area of the lake dresses up with beatiful white braids of bird cherries, when in summer dense abundance of plants on the coasts resonates with the sound of singing nightingales, oriols and other birds, this place is also perfect to spend great time. The Lake Kirkilai is immensely cozy and gorgeous in autumn when clusters of birch trees get covered with gold, when not only mountain ash trees become red but also the leafage of maple trees, and the rough-stemmed bolete mushrooms are hiding close to the ground between the chattering leaves, and strands of white-spotted mushrooms of the genus Amanita string out to various directions. The lake is the home of fish, groups of wild duck swim on its waters, cranes and swans are rare guests in the lake, martens can be seen on its coasts, beavers secretly prowl around and keep improving their nests.

Kirkilų k., Biržų r., Lietuva
We recommend watching this site through other browsers, for example. Microsoft Edge
I understood