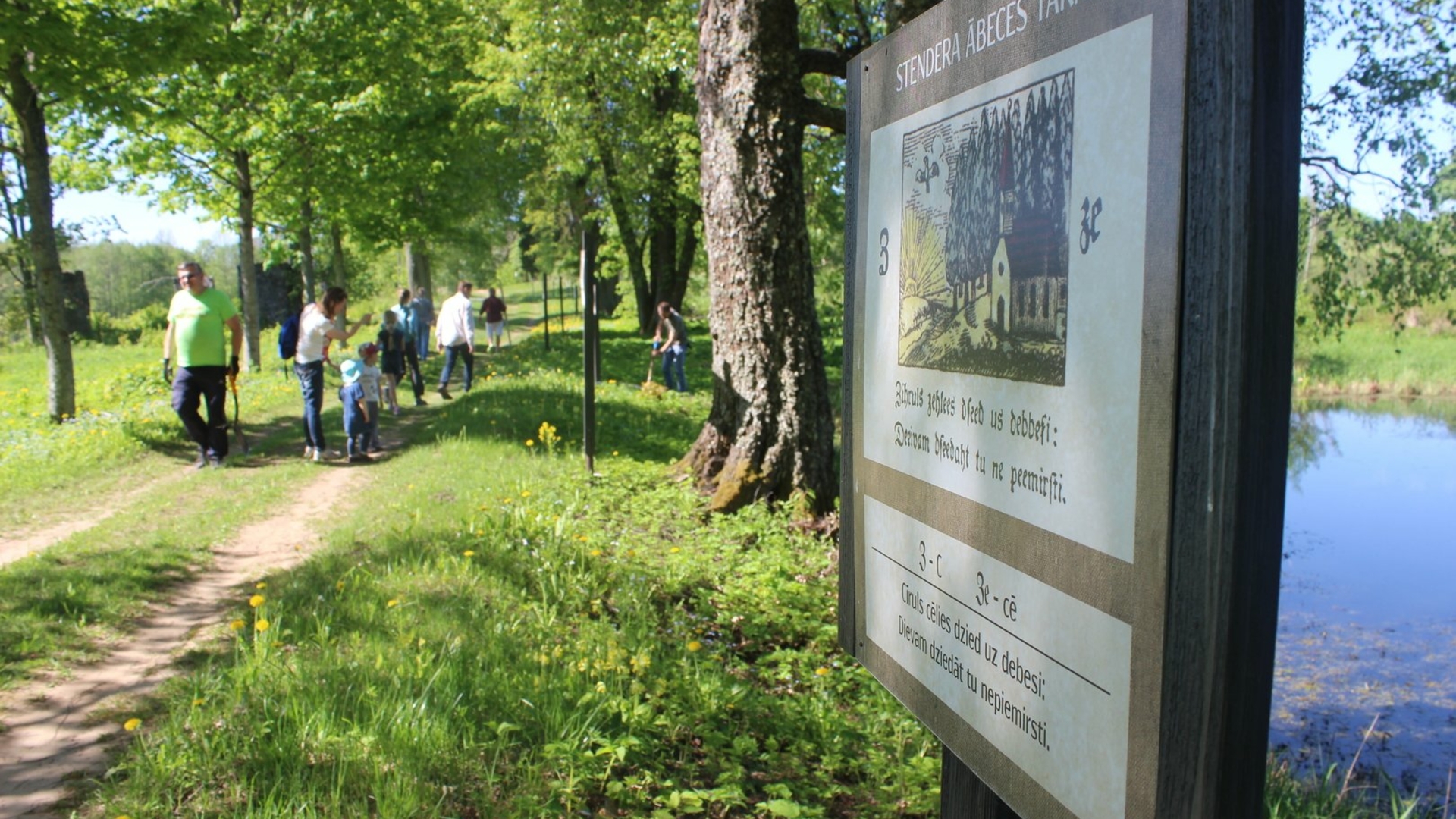 The "Acute Trail" and the Old Stender Memorial

The Abecs Trail was created in the spring of 2014 in honor of the 300th Anniversary of the Old Stender. Stender "Ābeces taka" introduces the letters of "Bildu ābice". It is about 300 meters long and leads to the place of the former pastor's manor. Ābece is the foundation for the child's world and one of the most philosophical books of all time. Everyone can find a plaque in the first letter of his name, read what the Old Stender taught and try to compose his own two lines.

In the Carnava, 12 km from Viesite, you can find out about the Stenders' family, from which there were 15 pastors of Latvian parishes, as well as doctors, lawyers, military personnel, pharmacists and tradesmen. Of all the known is Gothard Friedrich Stender (Old Stender) - German pastor, illuminator, founder of Latvian secular fiction, the most outstanding Latvian poet, linguist and inventor of the 18th century. The Cemetery of the Stenders is located on a hill behind the Church of Sunākte. Five generations of the Stenders' family reside on the grave hill. The old Stender's grave covers the tombstone of the Daugava dolomite with the inscription: "Sche was buried by GFStenders LATWIS born in 1714, mirror 1796 with sawu gafpafchu".

The graveyard area is buried by the widow of Baron von Bier, Warren Brook's Manor Angela, who committed suicide in unhappy love. The restored White Angel is installed on the grave.

Not far from the Stenders' Chapel on the hill, the columns of Sunākte Church are hung. The first Sunākta Lutheran church was built around the 1570s by the Order of the Duke of Courland by Gothard Ketler, built of wood, and found on the same hill where the white stone church stands now. The current Sunākšu Church (by number four) was built from 1827 to 1829. The church is owned by the remarkable altarpiece "The Ascension of Christ" (1844) by the outstanding Baltic-German painter Johana Leberteth Eginka (1784-1867). Memorial plaques have been laid in the church for the fallen people in the liberation struggles of the First World War and exported to Siberia. At the church there is a memorial stone opened in 1989 for Old Stender. The church is characterized by an Ampire-style architecture, with a three-story tower with accentuated eagles. The church's altar is made in neo-Gothic style and stands out with the richness of gothic elements.

About 3 km away, there is the Sippin castle mound near the Sparks and the House of Families. Sparks castle hill is set up on a steep 36 m high mountain, with a flattened, slightly creeping ground. There are two terraces on the eastern and southern slopes, where the mound is less upright. A stratum of culture is found on the mound, especially in the southern part, on the terrace and on the slopes, but on the eastern and northeastern foothills there is a large enclosure with fortifications. The foundations on the castle mound and settlement allow the use of the Sippin castle mound to be dated by the 1st millennium BC. In 1998, the flag of the European Heritage Days was raised on the hillfort.