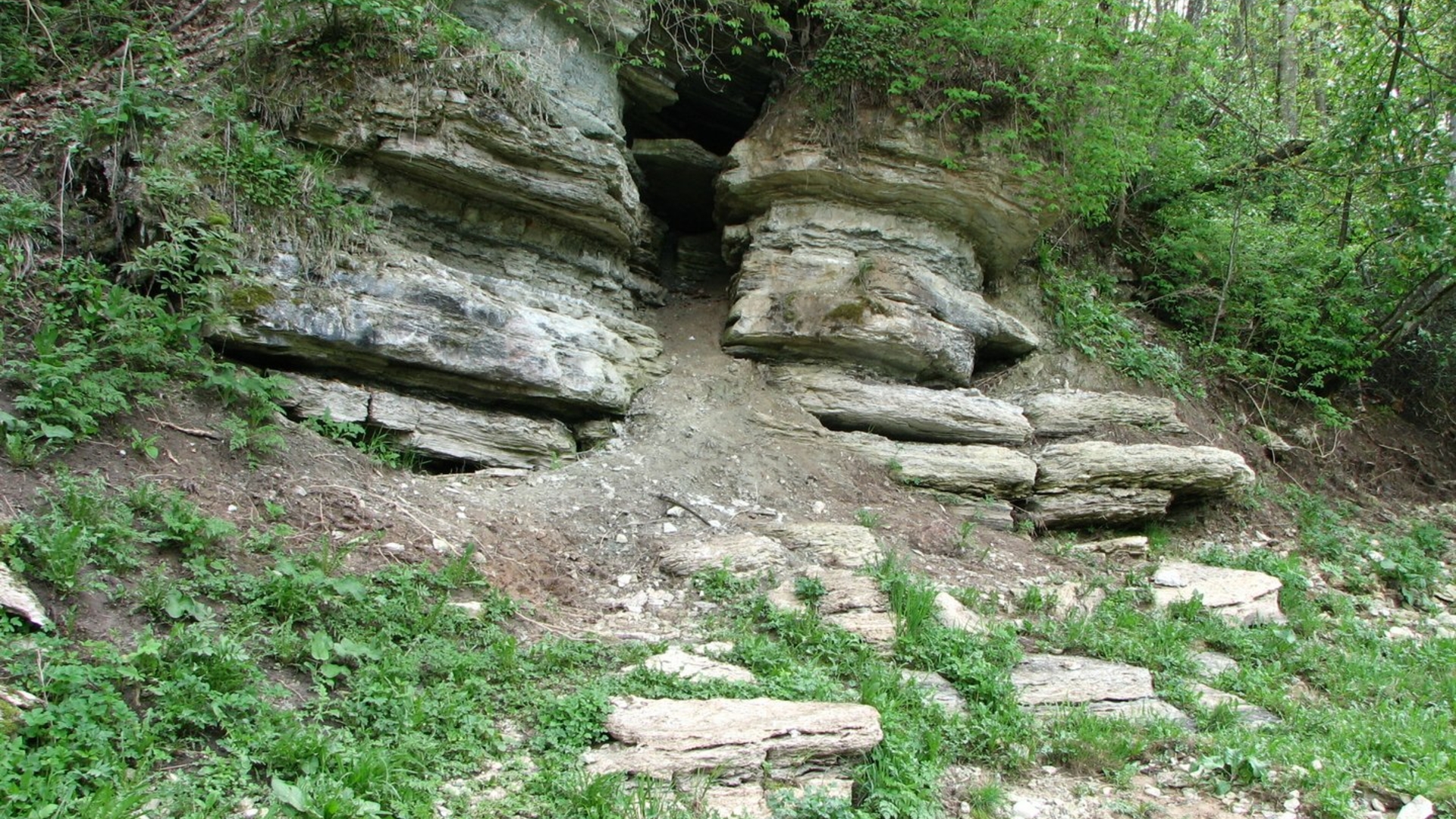 It is a dolomite and gypsum outcrop that is situated on the left bank of the river Nemunėlis. This geological natural asset that is situated in Biržai district, in Nemunėlio Radviliškis eldership, consists of the rocks of Devonian period of marine and lagoon origin.

The crop that is situated about 6 km away from the river Nemunėlis rises to the height of up to 5 m and is about 8 m in width. A crack with a width of 0,5 m, that opens and rises up, and leads to a cave with a depth of 4,3 m, plays a unique role. The intertwined layers of dolomite, gypsum and other geological structures are perfectly visible in this place. An old karst sinkhole with a diameter of 10-12 m, that descends to the depth of up to 2,5 m, is situated at the top of the slope.

There various legends about this geological natural asset. It is said that the devil lived here since the ancient times. The outcrop also served as asylum for the local men of the village who were affected by various woes and were desperately in need of comfort.

According to another legend, a long time ago, a white church with white towers stemming to the sky and a monastery stood on a high hill on the bank of the river Nemunėlis overgrown with a dark forest, not far from Velykoniai, where branchy spruces used to soak their branches in the streams of the river, where sweet flags and clusters of bulrush used to croon their ever-lasting song. The devil has settled nearby, in the most sombre backwoods of the forest. It used to spend days in the cave, and used to go out during the night to seduce the monks. The wicked being would imagine various things to do: it used to perch high up on the church tower and start ringing the bells in the middle of the night, or used to light the candles in the church, or, dressed as a woman, tried to seduce even the Brother superior of the monastery. The monks tried to defended themselves in every way against the unwanted neighbour. They used to spend long hours lying on the cold paving in the church, used to pray every day and used to torture themselves in various ways. But the wicked being was insuperable.

The monks‘ patience ran out and they decided to destroy the devil in its cave. One day the monks took incense and holy water, and with crosses in their hands and signing holy chants headed towards the cave of the devil. But it was hard to reach the wicked being who was sitting deep in the cave! The monks did not manage to pull out the devil. The latter one got terribly angry with its neighbors and decided to get rid of them. The wicked being has long planned how to destroy the monastery. The devil finally figured out what to do and took steps to complete its plan. The land in Leitiškės and in the nearby villages started thundering in the middle of the night. In the morning the monks found water depths near the church and the monastery. They understood the intentions of the devil. Since then the monks used to spend day and night continuously chanting and praying in the church. And the wicked being kept working on its plan. There was a terrible storm on Sunday night. The wind uprooted the trees of the forest that grew on the banks of the river, the river Nemunėlis burst its banks, and the thunder roared continuously. Then people realized that the devil was trying its last powers with the monks.

In the morning, the sun shone on the smooth water surface in the place where the church and monastery stood before they were destroyed. The locals took the first timid step to see the sanctuary that sank into the depths. And now, when it is completely quiet around, some people can see the tops of the sunken church towers through a transparent water depth.

Leitiškių k., Biržų r., Lietuva
We recommend watching this site through other browsers, for example. Microsoft Edge
I understood