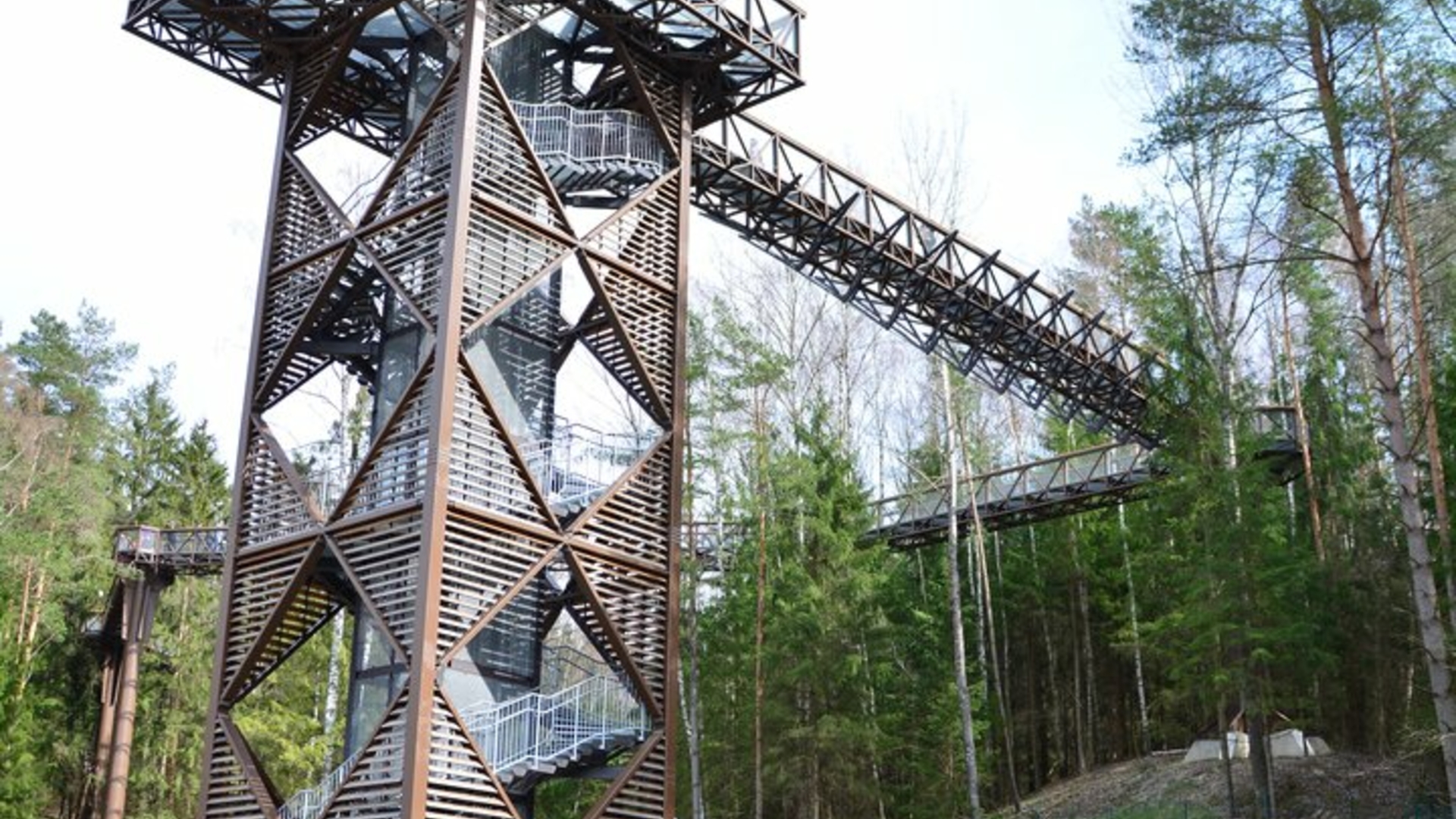 The Treetop Walking Path is the first of its kind in the Baltics and Eastern Europe and offers its visitors to take a walk along the treetops. The Treetop Walking Path complex is located in the Anykščiai Pinewood, near the famous Puntukas Stone. Many years this place attracted tourists to see the Puntukas Stone, which according to the legend, once was thrown by the devil, when he was in a fit of rage and wanted to destroy the beautiful Anykščiai church. However, the Anykščiai district is also home to other interesting objects like paths for hiking, cycling and water tourism. It is important to note that people with disabilities can also use the path as there is an elevator which brings you up to enjoy a magnificent view of the Anykščiai Pinewood. The relatively small forest is one of the most famous forests in Lithuania. The Anykščiai Pinewood was made famous by the Lithuanian poet - bishop Antanas Baranauskas, who described the beauty of this forest in 1858-1859 in the poem "The Pinewood of Anykščiai".

When walking on The Treetop Walking Path, you will be able to read excerpts from "The Pinewood of Anykščiai". There are 6 cognitive stations from the information centre to the beginning of The Treetop Walking Path, which offer information regarding the trees and the natural and cultural heritage of the Puntukas Stone. The Puntukas Stone features an engraving of the portraits and quotes from the last wills of legendary Lithuanian pilots Steponas Darius and Stasys Girėnas addressed to the new Lithuania.

While walking on the Pathway, you will be able to learn more about the local plants and wildlife. Pine, birch, spruce, oak, and black alder are not only visible, but some of them can even be reached by hand. To find out more you can book an educational tour and travel the Pathway with a tour guide.

The Treetop Walking Path is 300 meters long, and steadily rises up to 21 meters high. At the end of the path, there is an observation tower, with an observation deck located 34 meters above ground offering a view of the Anykščiai Pinewood, the Šventoji river, the surrounding plains and the tower tops of the St. Matthew’s church. The architectural and decorative solution of the tower is a traditional national motif – the rhombus, and it reflects the ethnographic individuality and identity characteristic to the Aukštaitija region.

The Treetop Walking Path complex was announced as a winner and received an award from the prestigious Tourism Innovation and Excellence Award organized by the World Tourism Organization of the United Nations in 2016. The Treetop Walking Path complex was presented as being extremely successful in the promotion of sustainable tourism, eco-tourism and cognitive tourism and attracting visitors to Anykščiai.

The Treetop Walking Path Complex is administered by the Directorate of Anykščiai Regional Park.